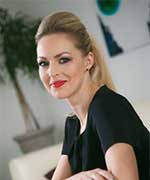 It was when designer Angela Mahon became a mother that she noticed a gap in the market for unique baby gifts. She found that buyer options were limited to a few items, such as photo frames and clothes, so she decided to design alternative gift products herself.

Inspired by her own son’s journey from baby to toddler, Angela began to design products that reflected the true process of an individual child’s growth and development — while at the same time bringing some fun and humour to the parenthood journey.

In April 2016, she launched Truzees, which designs, manufactures and distributes a range of baby gift products and kits for new parents.

Truzees offers a range of pieces from fun and witty novelty items that promote the reality of parenthood, to investment pieces such as keepsake boxes and kits —a place to cherish special items such as first scan, first curl, birth certificate and more.

Just two weeks after the business launched, Truzees was nominated in the Bank of Ireland Start-Up Awards and then won gold for Craft Based Start-Up of the Year.

Since then, Truzees has caught the eye of Irish fashionista, Pippa O’Connor and the company has enjoyed substantial media coverage including a write-up in the Irish Times magazine. Trusses products are stocked in Arnotts and Designist, as well as a few independent boutiques across the country.

Taking part in ACORNS helped Angela make key decisions to launch Truzees. With a team of four, Angela plans to employ three more staff by the end of 2016 and to design more unique products.

This innovative programme is funded under the Rural Innovation and Development Fund through the Department of Agriculture, Food and Marine (DAFM).